In professional gastronomy, chefs use a professional kitchen appliance called a combi oven to prepare meals. Thanks to the many specific functions of the combi oven, we can use this device to prepare all kinds of meat, vegetables, side dishes and even desserts. The combi oven offers many ways of cooking food such as cooking, pre-cooking, steaming, stewing, baking, baking, low-temperature or slow baking, sous-vide, confit, smoking, drying, grilling, grilling, roasting, frying, poaching, blanching, regeneration, sterilization or shock cooling.

British gastronomy is strongly influenced by history, especially colonialism in India, America and Africa. The roots go back to Celtic and Anglo-Saxon culture. English cuisine is considered fatty and indigestible. This is partly caused by the industrial revolution, when a large part of the people moved to cities and mass production of low-quality food began on the island. The most commonly used ingredients are meat, fish, eggs, cold cuts, beans and milk. National dishes include fish and chips, Yorkshire pudding or full English breakfast.

From British gastronomy, the term English breakfast has spread all over the world. Under this term lies a rich breakfast, which consists mainly of eggs, bacon, sausages, beans and pastries. Lunch in England is usually smaller than usual in Czech cuisine. For lunch, a sandwich is served - slices of white bread with pieces of cold chicken or ham or fish and chips, which is a fried fish in a three-ball with fried fries. In England, tea at five is traditionally served, such as "Earl Gray" or "Orange Pecot" with milk. At Christmas, English Christmas pudding is served in England, which has many forms. The word pudding in England means dessert, so it can be a sweet cake, cake or cream. Common ingredients are nuts, raisins, rum, eggs, breadcrumbs, sugar… A specialty prepared for the festivities is a duck with walnut stuffing. Yorkshire pudding is not pudding in the true sense of the word. It is a pudding served as a substitute for potatoes or rice. It is very supple and crunchy on the surface. English cuisine includes cheddar and wiltshire cheeses, pickles - vegetables marinated in vinegar, pajamas - cakes with various fillings or pigment - a sweet drink made of spicy wine sweetened with honey. 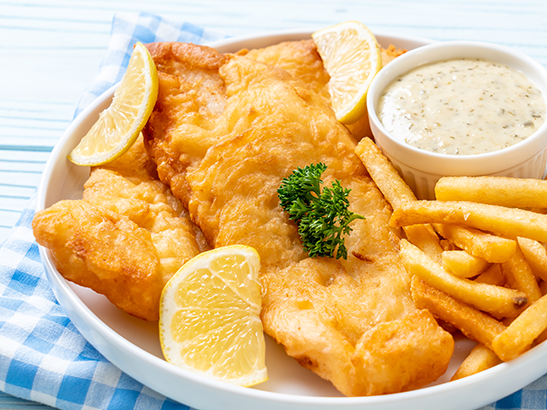 Calves liver with bacon and onion