In a professional kitchen

A professional kitchen appliance called a combi oven is used to prepare meals in professional gastronomy around the world. The production of dry and moist heat, short cooking times and the preservation of large amounts of vitamins are among the main advantages of this kitchen equipment. The combi oven offers many ways of cooking food such as cooking, pre-cooking, steaming, stewing, baking, baking, low-temperature or slow baking, sous-vide, confit, smoking, drying, grilling, grilling, roasting, frying, poaching, blanching, regeneration, sterilization or shock cooling.

Germany consists of many regions and in this country is especially true: what a region it's different tastes, aromas and recipes. German cuisine is influenced mainly by French and Eastern European cuisine. The dishes are characterized by a large portion. For this reason, it is not customary in Germany to serve several courses but only one main large course. Hearty and fatty dishes are the main feature of the kitchen. These are mainly sausages, hot dogs, sausages and other meat preparations. Meat is usually served with dumplings, cabbage or sauce.

Eintopf is one of the biggest specialties of German cuisine. The dish is prepared in one pot with a combination of meat and vegetables. The result is a simple and very tasty meal in the form of soup. Spätzle are a popular delicacy, especially in Bavaria. These are pasta or dumplings, which are served with meat dishes or sauces. Tyrolean bacon is a specialty from Tyrol. The recipe for real Tyrolean bacon is a combined method of northern smoking and Mediterranean meat drying. At Christmas, there must be a German Christmas gallery on the table. It is a plump bun sprinkled with a layer of powdered sugar. Inside the gallery are raisins, almonds, candied fruit and nuts. In German cuisine, three-pack or other batter, bacon and bacon are widely used, which give the dishes aroma and delicious taste. The favorite cheese is soft cambozola cheese with fine mold. It is made by hand and the whole process is very lengthy and demanding. Black Forest ham is a product originating in Germany and known throughout Europe. Weizenbier is a low-alcohol beer 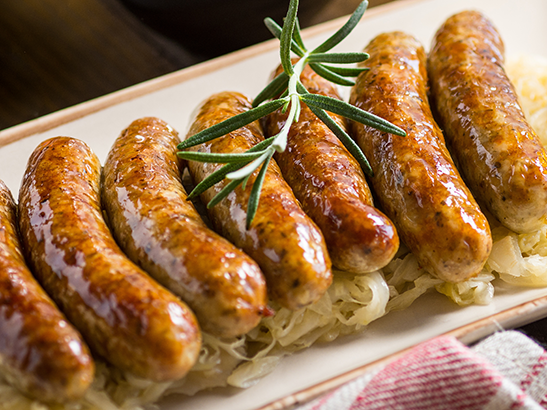