Today, new technologies for preparing a variety of dishes are entering professional gastronomy around the world. The combi oven is most often used in a modern kitchen. Produces steam, hot air or a combination of both. At the same time, this kitchen equipment ensures the preparation of healthier meals, higher yields or the preservation of nutrients and vitamins with higher nutritional value. The combi oven handles baking, cooking, pre-cooking, steaming, stewing, roasting, low-temperature or slow baking, grilling, frying, roasting, confit, sous-vide, smoking, drying, barbecue, poaching, blanching, regeneration, sterilization of jams or shock cooling.

Polish cuisine is very diverse, the dishes are rich and hearty. Many dishes are inspired by Poland's neighboring countries. The menu often includes sauerkraut, beets, potatoes, mushrooms, dumplings, meat, cream, eggs, game or brynza cheese, which is also common in Slovakia. Marjoram, cumin and dill are widely used as spices.

Soup is the basis. The menu is written as a soup, thick soup. Well-known is barszcz - beetroot borscht, which has its roots in Eastern cuisine. Another peel of beets and its petioles is botwinka served with hard-boiled egg. The summer version of the soup is called chłodnik. Serve cold with sour cream. The traditional soup is also beef or chicken broth with onions, mushrooms, bacon and sour cream. Other well-known specialties are Krowky candies, hearty bigos, or pies. 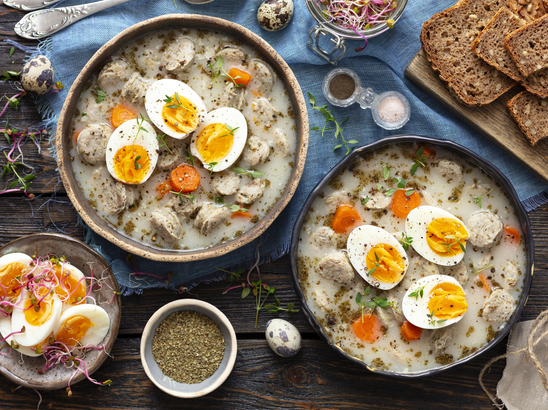