In professional gastronomy, the combi oven is often used to prepare meals. This is a professional kitchen facility that offers professional chefs many options for cooking. Thanks to its properties, this kitchen equipment is great for preparing all kinds of meat, vegetables, side dishes, including pastries and even desserts. The combi oven offers many ways of cooking food such as cooking, pre-cooking, steaming, stewing, baking, baking, low-temperature or slow baking, sous-vide, confit, smoking, drying, grilling, grilling, roasting, frying, poaching, blanching, regeneration, sterilization or shock cooling.

South Asian cuisine includes Thai, Vietnamese, Indonesian, Filipino or Burmese. Nowadays, South Asian cuisine is becoming popular all over the world. The cuisine is influenced by Chinese and Indian gastronomy, but still retains its distinctive charm. In the 16th century, there was a turning point in South Asian cuisine, and chili peppers imported from Portugal began to be added to the dishes. An interesting feature of the kitchen is the way of dining. All courses are brought to the table at the same time and the diner eats what he wants.

The most famous specialties of South Asian cuisine include glass noodles, fish dishes, tofu and noodle chicken soups. Glass noodles serve as a side dish to a number of dishes, are made from mung beans and at first glance resemble nylon thread. Pad thai is a designation for fried rice noodles along with other ingredients. It is often a meatless dish. Sushi comes from Southeast Asia and was originally the food of poor dockworkers who ate slices of raw fish wrapped in rice. Today, sushi takes many forms with many ingredients. In South Asian cuisine, sweet Asian sauce is traditionally used for roast meat, fried noodles or spring rolls. It is made from soybeans, water, sugar and flour. Sweet chili sauce with crushed chili comes from Thailand. It serves as a seasoning and should not be missed on any table with Asian food. Another flavoring agent used in Asia is aji no motto or Thai curry paste. Banana leaves are widely used in the kitchen. Fish, chickens and other types of meat are wrapped in them when roasting. The leaves are not consumed, but they give the dishes a delicate taste, aroma and facilitate their preparation. The specialty is yogurt with saffron. Saffron is first boiled in milk and then mixed into yogurt. 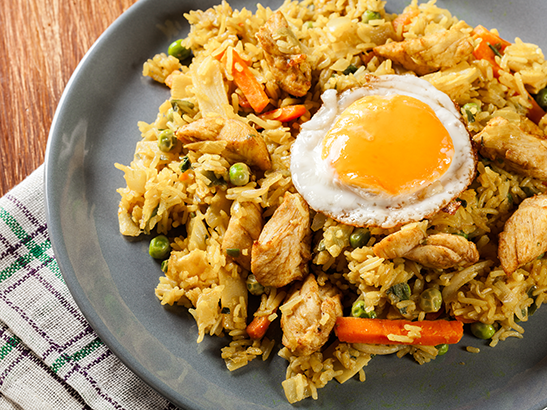